This year I had a really good year on the upper Trinity River between Lewiston and Junction City. I did a number of floats and also had the chance to do a lot of walk-in fishing. I know a lot of people have been complaining about the fishing, specifically the number of fish coming into the system and the fishing pressure, but this year was great for me. I had a number of multiple fish days, including a stellar trip with Andrew Harris of Confluence Outfitters where I surprisingly hooked and landed five steelhead, my friend Eric landed a hog of a fish (as you can see below) and my buddy Brendon caught some beautiful fish too. If you need a good guide, reach out to Confluence. I’ve fished with them three times this year and every time was productive and I learned a lot! 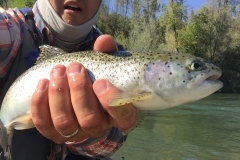 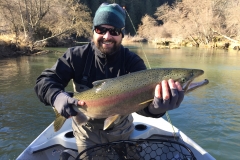 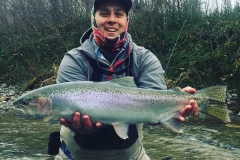 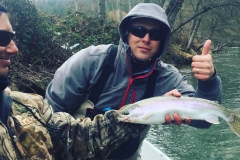 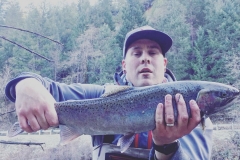 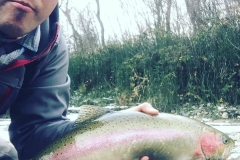 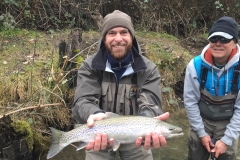 This was not the case on Monday, April 3. My friend Joc and I decided to head up to the fly fishing only section of the Trinity, just above Lewiston. It opened up for the season on the previous Saturday, April 1, and I thought there might be a fair amount of steelhead hanging out up there.

We fished hard from around 8:30am until 8pm, throwing just about everything. I nymphed using yellow and brown stoneflies, rubber legs, psycho nymphs, copper johns, glo-bugs / beads and also swung a variety of streamers and top-secret steelhead patterns that usually elicit huge grabs. Nothing. And not only did we fish the top, we went and fished below in some of my favorite walk-in locations. I think it’s safe to say that the steelhead season on the Trinity is pretty much over. Here are a few pictures of this beautiful river… since there weren’t any fish!!! 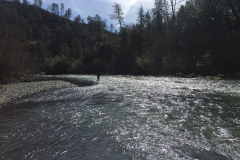 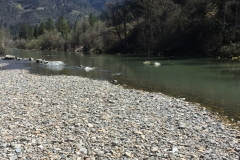 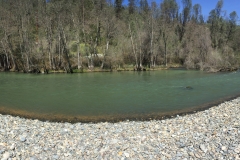 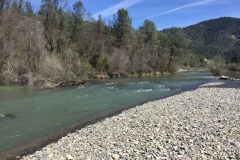 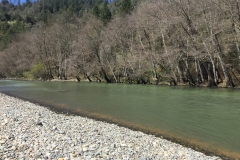 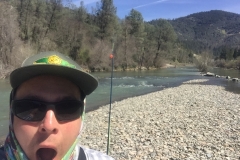 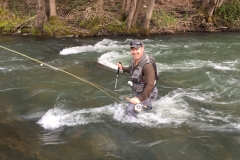 For the past three months, I’ve been patiently waiting for the Sacramento River to become fishable (either the Lower or the Upper!!). Patience is a virtue that many fly fishers are forced to develop, but truth be told, waiting for the river’s flows to come down and the water clarity to improve took a lot of hard work. In fact, my daily prayers were,

“Dear Lord, it is I, your humble servant Luke. Would you please make the Sacramento River fishable? If you do this, I would be very happy and I promise to smile on the river in an effort to be nicer to people and I will even stop telling other fisherman I caught everything on crickets.”

This was serious, obviously. And so with all of the reports that the river was starting to actually fish well, I decided to float the river last Friday and see for myself.

The Lower Sac, once again, did not disappoint! My friend Kyler and I floated from Sun Dial Bridge down to the Bonnyview boat ramp on what was supposed to be a day that was going to be marked by non-stop rain, thunder, and even some lightening! Well it definitely stormed a fair amount and, as @Bear_vs_Trout confirms. The wind was crazy at some portions of the day and we got drenched at several points that made me feel like I was in a monsoon. We got on the river around 10am and then floated until around 7:30pm. The fishing started out pretty slow but once we found trout, it was great… mostly because I caught one beautiful fish that measured out to around 22inches, as well as a fair amount of smaller fish: 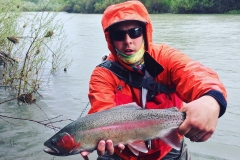 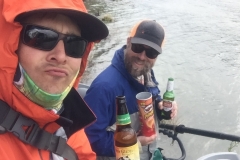 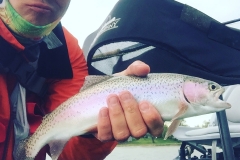 On Monday, I did the same float with my friend Mike in weather that was nearly perfect. It was warm and sunny throughout the day and we only had one drift boat guide act like a chump desperately in need of a class on fishing etiquette. I get that you have clients paying you money to put them on fish, but when the river is fairly uncrowded, you don’t need to row as fast as you can so you can get in front of me and cut me off. You are, quite frankly, a tool. But… since the river was wide open, we just kept doing our thing and I caught a ton of fish anyway 🙂 Plus, while doing a little walking along the river, I found a fully intact bike that got carried down the river in the recent high waters… which was pretty hilarious. Were I thinking, I’d have rode it and got it on film. Maybe I’ll do that on the next float! 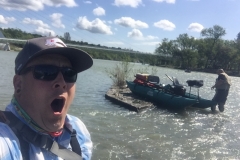 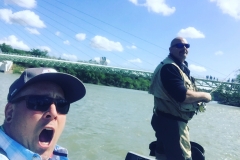 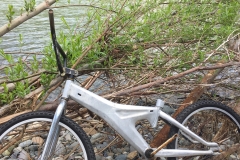 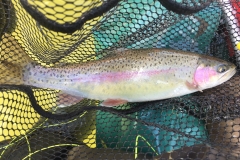 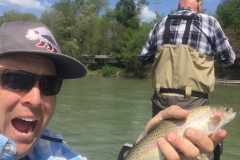 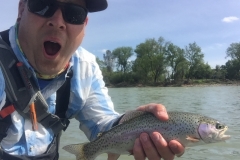 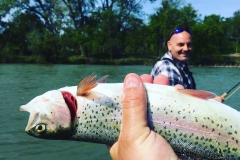 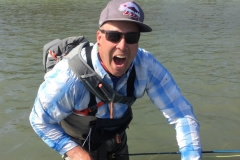 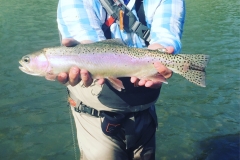 Well, if you are reading this, you’ll probably notice I haven’t yet mentioned what all of the fish were caught on. Let me just say this: if you figure out what the fish are taking, the sky is the limit, ha ha! The one hint I’ll give you is that the fish are hanging a lot more in the soft water than the fast riffles… 😉